In the lead-up to our Festival of British Advertising, we are asking adland's finest to pick their top five ads from the past 100 years. This week, Sera Miller, Deputy Chair of the IPA Effectiveness Leadership Group and CEO of Material, picks her favourite ads that 'exemplify the lyricism of language and strong visual iconography' that advertising brings to life...

Harvey Nichols, 'Sorry, I Spent It On Myself'

In 1996, I was a student in Leeds. In amongst the ubiquitous “CHOOSE LIFE” posters on my bedroom walls were a series of postcards created by Harvey Nichols to announce the opening of their first regional store in the UK which read: “HARVEY NICHOLS LEEDS, NOT FOLLOWS.” I don’t remember any of the controversy from the time, I just remember the moment where I realised that my love of the lyricism of language and strong visual iconography might not just be something that I thought about in a lecture theatre and might actually be something I could turn into a job.

This ad for me reflects that same spirit. I sometimes don’t know what I love more about the “Sorry, I Spent It On Myself” work: the fact that Harvey Nichols genuinely had the balls to produce a wire sponge and sell it for 96p in such impeccable packaging, or the fact it came out of the agency who are responsible for creating the work with another client that defines the start of traditional warm and fluffy Christmas for many of the nation (Adam&Eve).

Beats By Dre, 'The Game Before The Game'

R/GA London had already been smashing it with Beats by Dre but this took a powerful insight gained from observing and studying elite sporting talent and turned it into a simple yet powerful creative idea: “the game before the game.” When this first broke, Beats weren’t a sponsor of the World Cup - they weren’t even deemed to be a sports brand. They found a moment that only Beats could own: the pre-game, the moment that you get inside your own head, the moment the game can be one. After that, the red wires and iconic cans were everywhere: from swimmers warming up pool-side at the Olympics to gyms up and down the UK. A masterclass in how insight driven creative can enable you to change the conversation and reframe your competitive set. 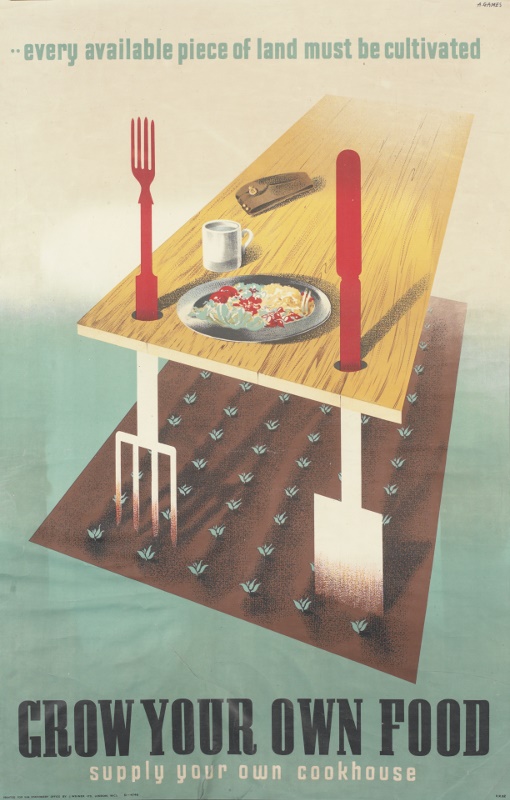 I confess to a bit of an obsession with WWII public information posters: they represent a golden age of graphic design in poster advertising of which this ad and its creator Abram Games hold a special place in my creative heart. Games executed some stunning work for the British Government during wartime and although his work on the Careless Talk campaign and later Festival of Britain are outstanding exemplars, there’s something about the beautifully simple typographic and visual connection between food and plate in this ad that amazes. Not without his controversy (his work was pulled by Churchill on more than one occasion), Games’ advertising kick-started behaviour change in those living in built-up areas who until this point just weren’t familiar with growing their own fruit and vegetables to top up rations.

'Sport England, This Girl Can'

Missy Elliott as a soundtrack. The break at the “QUIET” moment where you can just hear the breathing. Lines like “Take me as I am or watch me as I go.” A red-faced, sweaty, celebration of not worrying about how you’re doing it, just getting off your beautiful backside (whatever its shape and size) and doing it anyway. Fearless and powerful storytelling to help ignite behaviour change by working to remove a key barrier to participation: fear of judgement itself. Whilst yes, this a stunning piece of craft, it has also has had real impact, translated far beyond even the binary definitions of gender encapsulated in its own name - and that’s why its such an important piece of work for me. It is effective precisely because of its creative honesty and its authentic insight. Comments like “Running has honestly saved my life” reinforce the campaign’s impact on both mental and physical health and underpin results like “2.8m 14-40 year old women say they have done some or more activity as a result of our campaign.” Filed under “work I wish I’d done” forever.

Boddingtons, Do You Want a Flake In That Love?

By ‘eck, you smell gorgeous tonight petal. For a glorious period of time, you could not walk into a pub in the North West without hearing this phrase, or indeed anywhere else in the UK as soon as they heard your accent. These ads transformed Boddingtons from a local beer to a national brand with proud regional roots. All based on a product truth - that Boddingtons has a creamy head - not a lazy blokeish joke whilst still feeling like it sums up the humour and energy of the time. Ordering a pint of Boddies and then asking someone “d’you want a flake in that love” even became a pretty successful ‘socialising’ technique in pubs back when people still used to go to them (so I’m told…).